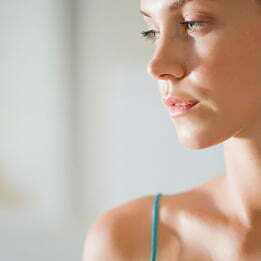 In a recent study, men and women were seen to have improved surgical results after combining a chin and nose surgery into one procedure. It may also have enhanced long-term stability and streamlined the overall surgery process.

According to a story in US News & World Report, many people interested in changing the shape of their nose may also benefit from a procedure for their chin as well. Dr. Dario Bertossi, the lead researcher, states that, “We can for sure improve facial profile with stable results with rhinoplasty [nose job] alone, but the association with genioplasty [chin surgery] is fundamental and necessary to achieve the best aesthetic result.”

This Italian study was published by the Journal of the American Medical Association, and followed 90 individuals who underwent both procedures at the same time. They were able to follow the recovery of these subjects for several years to determine the longevity of the procedures.

One finding showed that patients who had a bone remodeling chin surgery had greater long-term stability than those who had a simple chin implant put in place. According to Bertossi, “Genioplasty, if performed with bone remodeling, is a stable operation which guarantees long-term results.”

Choosing to have both surgeries at the same time has a number of other benefits, including cost and time. By combining surgical procedures, this lowers surgical costs and decreases the cumulative surgery time. In addition, only one recovery period is required, rather than two separate and distinct recovery periods.

While both surgeries are not necessarily the proper answer for every patient, the combination surgery was shown to be particularly advantageous for those with microgenia, or a disproportionately small chin. Another procedure that could be done in conjunction with either of these is blepharoplasty, or eye surgery. Non-surgical procedures that could enhance the overall effect include Botox and dermal filler injections.

Want contoured cheekbones? Here’s what you need to know about buccal fat removal. Want contoured cheekbones? Here’s what you need to know about buccal fat removal.
See All